Acting on behalf of the joint venture contractor awarded the construction, finishes and services for a vertical connection system in Valletta, iAS are responsible for structural engineering design services together with the supervision of construction and finishes. The 60m high tower construction required the incorporation of a wind tunnel analysis to take into account its particular geometry and location.

Challenging issues involving the detailing of the architectural concrete finish and the perimeter mesh screen, were dealt with together with AP who are the original architects / client consultants responsible for the architectural design and planning permission.

The Barrakka Lift has provided an opportunity to create a special expression of our generation’s mark on the capital through the manner in which function and engineering meets architecture. The resulting visual expression relates to the adjacent bastion wall whilst reflecting current construction trends and creates an iconic structure within the historical context of the Lascaris Ditch. The project has also reinstated an important transportation link between Valletta and the Grand Harbour.
The architectural expression of the tower, designed by the architectural firm AP, involves the use of an anodized aluminum mesh which is attached to galvanized steel channels that wrap around the perimeter of the exposed concrete structure. The manner in which the construction materials are used reflects an undressed approach, with the honeycomb mesh screen providing an interesting contrast to the bastion walls and rock face. The exposed concrete required shuttering works which needed to be carefully planned in order to achieve a neat exposed surface, where the joints, bolt holes and angle fillets needed to be set out in a repetitive standardised manner.

The project entailed engineering considerations which are usually not required for typical building projects. The design brief had been developed by GHRC on behalf of TM, where one of the parameters involved the need to consider a 100 year design life, where typical building design normally considers a 30 to 50 year criteria. This consideration displayed the client’s intent for a long life span in the use of the infrastructural project. The extended design life, together with the site’s proximity to the sea, influenced the durability parameters for the material specifications, requiring use of anodized aluminum and enhanced galvanizing thickness and concrete mix properties.
The 100 year design life also affected the design wind speed adopted for structural design, with the use of the predicted 1 in 100 year wind speed. Due to the particular location and geometry of the structure, the varying wind loading along the height of the tower was deduced from the use of a wind tunnel test. This entailed the use of a scaled model, taking into account the surroundings within a 100m diameter, and using meteorological data to simulate actual conditions. The wind tunnel test was carried out by specialists in the UK and provided the required actions to be taken onto the structural analysis models.

The lift tower was also designed to withstand seismic design, where statistical historical data of earthquake occurrences was used to model the magnitude of the movement. The seismic design involves the consideration of critical modes of movement and, in addition to the other loading cases, the resulting stresses and movement were used to calculate the concrete reinforcement and required sizing of the structural elements.
The tower structure consists of two C-shaped concrete cores, which house the lifts and are tied together by a central stairwell. The 55m free standing tower is supported only at the base, where the concrete bridge at the upper level rests on the bastion wall on sliding connections. This concept results from a design intent to have the tower completely independent of the bastion wall. The bridge sliding bearings are located below the two upstanding parapet walls, which are the principle structural elements that support the weight of the bridge, and have been detailed so as to accommodate the predicted movement of the tower.

The lifts are able to travel the total height in 25 seconds and house approximately 21 passengers each. As a precautionary measure, restrictions on the use of the lifts is enforced for a preset critical wind speed. This procedure is maintained in order to protect the exposed cables and cabin of the panoramic lifts from wind action and tower deflections. Instrumentation is located within the tower in order to relay measurements of the wind speed to control mechanisms which enable procedures for the automatic closure of the lifts. In addition, seismic instrumentation has also been installed to stop the lifts in the occurrence of any irregular movements resulting from earthquakes.

Execution of works commenced with construction of foundation base, continuing with concreting of walls and stairs, placement of bridge bearings and construction of bridge and finally with installation of perimeter metallic screen, lifts and building services. The construction works, metallic works and lift / building services were completed by contractors Polidano Brothers Ltd., JSD Ltd. and Mekanika Ltd. respectively. Due to the scale and height of the development, the completion of the project required extensive logistical planning including consideration of the tower and bridge scaffolding, craneage requirements and the temporary attachment of a transportation hoist. In addition, the various contractors faced the challenging task of working in parallel within the confined working space. The design, planning and site works execution were all completed by local consultants and contractors, providing a testimony to the capabilities of Malta’s workforce. 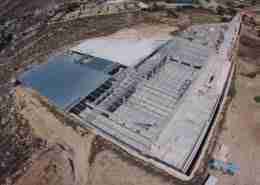 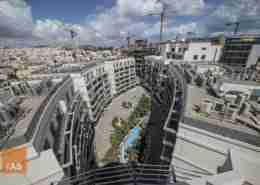 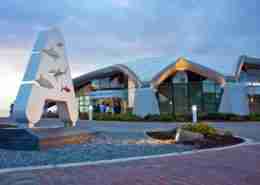 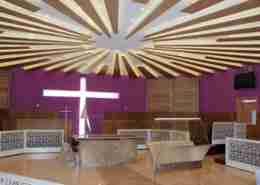